How many times have you thought to yourself “there’s got to be a better way?”

Back in 2005 I personally wrestled with this question. For a year now I had worked in the sports supplement industry and loved it. As a former ultra-skinny kid I fell in love with the iron in high school and now as an adult I had to pinch myself at times to remind myself this wasn’t a dream – that I was actually working in the industry that had been such a positive influence on my life. But the industry that I consumed as a teenager through magazines, protein powders and clanging iron was quite a bit different than I had expected. Within a year I learned and experienced some of its hidden flaws.

The upside to all of this was that I wasn’t alone…this thinking that there’s got to be a better way. It was shared by my business partners Brian Andrews and Dr. Jeff Golini.

When Brian and I started our working relationship with Jeff in 2004 he was three years into the release of his patented form of creatine monohydrate. He named this invention Kre-Alkalyn and it forever changed the way we supplemented creatine monohydrate. Gone were the days of mega loading and cycling, stomach distress and other negative user reactions to traditional creatine supplementation.

But back to a ‘better way’…

Raking In Millions Due to Deception, Lies and Flat-Out Cheating!

We were all fed up with the dishonesty and deception in the magazine ads, but the thing that really got our blood boiling were the companies ripping off consumers by spiking their products with drugs, pixie-dusting ingredients or flat-out lying on the label.

Like most people, we spent the early years of our training careers beating our heads against the same proverbial wall as every other athlete looking for the magic “secret”. We know the pain and frustration of being skinny, weak, and feeling inferior.

After trying every new supplement and training program we could find, we realized that each athlete (us included) faced the same three problems:

It continued to get more and more frustrating. Then one day, we decided we’d had enough. That’s when we decided to create a company that could help athletes everywhere overcome the three problems listed above: EFX Sports.

We started in this industry as consumers just like you. That’s why we decided to do things differently from day one. You see, we knew the last thing this industry needed was another supplement company pitching an endless array of fancy products with slick labels, pushed by over-hyped ads.

Instead we committed ourselves to our vision of creating something for our customers something that truly serves their needs and will ultimately live on past us—our legacy. It’s an ongoing, never ending process because there is always room for improvement. But just like building the ‘perfect’ body, there are few pursuits more fulfilling.

We want to help you get the most out of your body; to find your limits, and then push past them by using cutting-edge supplements… instead of drugs. This way you maximize the benefits while minimizing the side-effects and risks commonly associated with drugs. In the end, we steadfastly and unapologetically believe we offer the very best way to do it.

We’re Advocates for the “Bodybuilding Lifestyle”

Why? Because we believe it offers more advantages than almost anything else you can do. Not to mention nearly every other exercise discipline in existence has bodybuilding principles at its core. Unfortunately, bodybuilding has somehow become more and more about “appearance at all costs” than anything else. Seriously, who cares if you look great on the outside, but you’re more like a rotten potato on the inside? That’s not the bodybuilding we know and love.

We think it’s time to redefine what bodybuilding means…to take it back to why most people started doing it in the first place: for improved health, greater self-esteem and improved performance. (Of course, looking great certainly doesn’t hurt either!)

Bodybuilding is all about the journey you take while pursuing your version of perfection. It’s the sacrifice and the discipline. It’s doing what others are simply NOT willing to do or only wish they could. Furthermore, there are thousands of bodybuilders who are just as “hardcore” as any Pro when it comes to the day-in, day-out dedication and full on blood-and-guts training it takes to build a more muscular body.

The fact is, most of these people will never set foot on a competitive stage. Life is their stage. And we say it’s about time all these individuals were recognized for their efforts too. That’s where EFX Sports comes in. 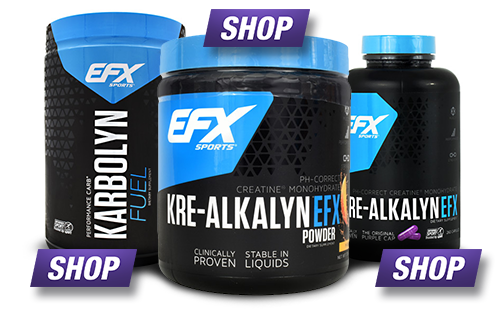