As supplement consumers ourselves, we’re always circumspect of any nutritional supplement or medication that claims to be a Panacea for many diseases or purposes that it will help you build ten pounds of muscle in one week. However, if you look at the claims behind medical marijuana and the potential therapeutic benefits of cannabis, there is no shortage of evidence to support them.

In fact, a search on PubMed for scientific journal articles published in the past two decades and containing the word “cannabis” produced over 8,600 results; when you add the term “cannabinoid,” that number shoots up to over 21,000 articles!

When you do the math, that means that for the last 20 years, more than two scientific papers relating to cannabis and cannabinoid are published (on average) every single day! Seems pretty amazing, right?

When you consider all the different conditions that cannabis is suggested to treat, it’s actually not that crazy to think that scientists and research institutions are actively researching this herb.

But the skepticism among mainstream consumers remains high when it comes to the potential benefits of cannabis-related products, like Axis Labs CBD 500. How can one plant species have so many positive impacts on human health and longevity, with seemingly no harmful side effects?

As scientists dig for the answers to these questions, they discovered an unknown physiological system that appears to be the core unit of the healing, health, and longevity of every human (and almost every animal, even tiny nematodes): the ECS (endocannabinoid system).

What Is the Endocannabinoid System?

The ECS, short for endogenous cannabinoid system, is appropriately named after the cannabis plant that ultimately led to its discovery. The ECS is ostensibly the most essential physiological system for the foundation and maintenance of human well-being.

On the contrary, your body naturally produces cannabinoids, which are endocannabinoids (short for endogenous cannabinoids). The two most researched of these substances are 2-arachidonoylglycerol (2-AG) and anandamide. These endocannabinoids are created as necessary from arachidonic acid derivatives in cell membranes, producing a localized effect before being broken down via enzymes.

What makes the ECS so integral to human health is that it intersects with many other bodily systems. Endocannabinoids receptors are present in vital organs, the brain, glands, connective tissue, and even immune cells. Within each part of the body, the ECS works to accomplish one specific goal: homeostasis.

If you recall from biology class, homeostasis is how your body maintains a stable internal environment when faced with external changes. The simplest example of this is your body sweating when it’s hot outside. Your body naturally stays around 98 degrees Fahrenheit internally, and sweat is how it dissipates heat to keep you cool.

The ECS promotes homeostasis at every level of life, from the subcellular level to the organismal level, and likely even at the community level by influencing our relationship with the external environment.

Here’s one example: When you experience an injury, like an ankle sprain, cannabinoids can be found reducing the secretion of activators and sensitizers from tissue surrounding your ankle, thereby stabilizing your nerve cell to inhibit excessive firing; this then calms nearby immune cells to block the release of pro-inflammatory chemicals.

That’s three distinct mechanisms of action on three distinct cell types for one purpose: attenuate your pain and alleviate the damage caused by the ankle sprain

The ECS, with its intricate actions throughout the nervous system, immune system, and all of your body’s organs, is literally the bridge between your mind and body.

What Are Cannabinoid Receptors? 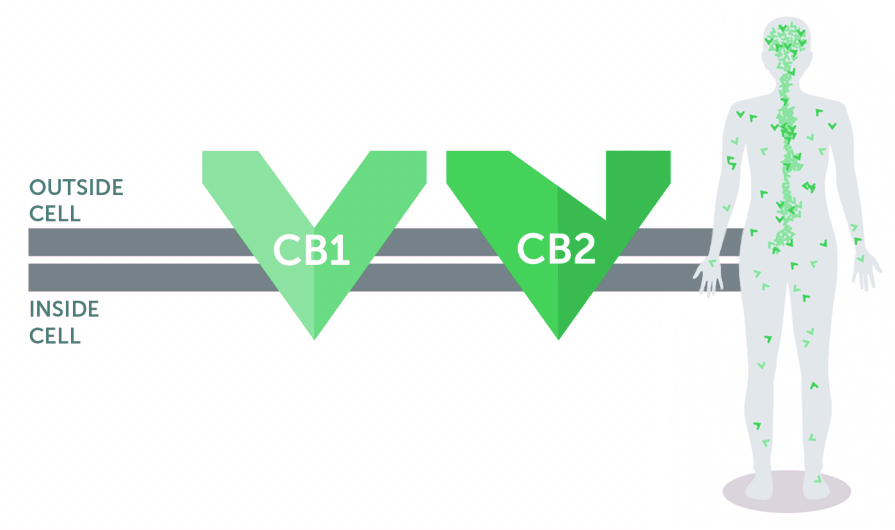 Researchers have identified two cannabinoid receptors: CB1, primarily found throughout the nervous system, organs, gonads, and connective tissue; and CB2, primarily found throughout the immune system and associated components. Moreover, many tissues have both CB1 and CB2 receptors, all with their own distinct actions. Scientists postulate that a third cannabinoid receptor exists, but this remains to be elucidated.

It’s important to note that the feelings of euphoria (“high”) you may experience after ingesting THC comes arises through the activating of CB1 receptors. CBD is a non-psychoactive cannabinoid as it binds primarily with CB2 receptors and has a much lower binding potential for CB1 receptors. In many ways, this makes CBD the most practical and safe cannabinoid in cannabis, since it doesn’t alter your state of consciousness.

What Are the Evidence-Based Benefits of CBD?

And these are just the benefits of CBD that we know about! 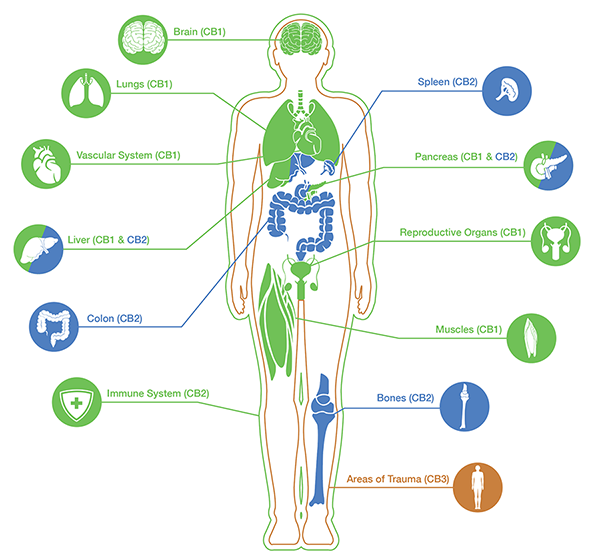 As the research and science behind cannabis and the ECS continue to grow, one thing remains patently clear: a properly functioning ECS is the basis of good health and longevity. From your embryonic implantation in your mom’s uterus, to nursing and maturation, to fighting off pathogens and healing wounds, the ECS helps you adapt and survive in the fast-paced and ever-changing world we live in.

Naturally, the best strategy is to use modest, regular doses of CBD to stimulate your ECS and its restorative properties.

This is changing, in part because the public is demanding it. People want safe, natural and inexpensive treatments that stimulate our bodies’ ability to self-heal and help our population improve its quality of life. Axis Labs CBD products are one such option.

Having this rudimentary understanding of the ECS and how phytocannabinoids interact with it is only scratching the surface of the complex and intricate physiological underpinnings that govern the benefits of CBD in humans. Rest assured, research in the coming years will help us better understand just how important CBD and the ECS are for our well-being.